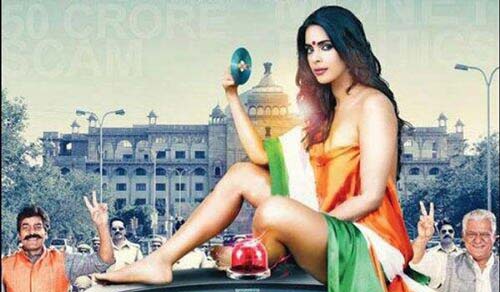 What would you expect when you see veteran actors like Naseeruddin Shah, Anupam Kher and Om Puri team up for a film? Something along the lines of Jaane bhi do Yaaro, right? Well, this one is several galaxies away from what you expect. Why? Because it has Mallika Sherawat.

The film is supposed to be inspired from Bhanwari devi and politician Mahipal Manderna’s sex tape controversy. Om Puri essays the role of a politician named Dinanath, while Mallika Sherawat plays a dancer named (Anokhi Devi), who aspires to become a politician someday. Both get intimate and later Anokhi starts blackmailing Dinanath with the sex tape. He tries everything under his power and beyond to grab the tape and destroy it, but Anokhi manages to keep him under stress and the so called “pace” of the film.

The sex scenes between Mallika and om Puri were the talk of the town for long. But, if the director thought that it would sell the film, he is highly mistaken. The film lacks crisp editing and smart direction. Although it boasts of the most talented trio in the industry, they are not able to save the film at all.

The songs are an absolute let down, the music is below mediocre and the performances are average since most have nothing to do. Om Puri puts in effort, but he is unable to rise above the bland script and screenplay.

As far as Mallika Sherawat is concerned, darling you are old now. And call it poetic justice; this crass film serves you quite well for putting on a fake accent and ridiculing India at Cannes. I am surprised somebody even chose to cast you in a film after such hypocrisy exhibited by you.

The film has one of the finest actors and yet it fails to create the effect it aimed for. Perhaps because the script is loose and affects the performance of every actor in the film; barring Mallika of course!

This film could have done well with a better team and a stronger script. The simple reason being the story is inspired from true facts and therefore it can attract people.

Our verdict: GIVE IT A MISS! Even Mallika does no wonders, if that’s what you are looking for.