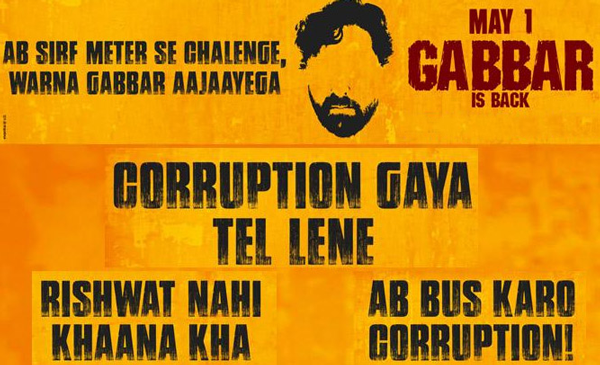 One never needs to say “He’s back!” when it’s Akshay Kumar. He never leaves. His swell acting and I-mean-business portrayal of Ajay left all of us asking for more. Seems like Akshay heard it and here he is now as Gabbar. While our Sholay Gabbar was a ruthless villain with iconic dialogues and rustic looks, this modern Gabbar, by Akshay, is quite evolved and has a different area of interest. Keeping the country’s present scenario in mind, where most people are used to taking/demanding bribes for the smallest of works, Gabbar is a man with a mission to eradicate this evil practice from the country.

The teaser has Akshay’s voice delivering an iconic dialogue by Gabbar Singh from Sholay with a quirky little change that reveals the basic plot of the film. Honestly, there have been films that have dealt with the issue of bribe before, but when it is Akshay teamed with director Krish, it’s not the WHAT, but the HOW that interests us. The last time these two got together for Rowdy Rathore, they lit the screen on fire and took the entertainment level of an action film notches higher. They also gave its producer Sanjay Leela Bhansali his first commercial success (in terms of the money the film made). And as if the movie Gods heard our prayers, these two are back with Gabbar. The first teaser looks promising along with the fantastically sketched motion poster of the country’s evergreen ‘Khiladi’.

We cannot wait any longer for this one. If this one turns out the way it’s looking at the moment, 1st May is going to be epic for Bollywood. Akshay Kumar ahs always been an actor who delivers much more than what you’d expect out of him. Not only is his look stunning in the film; it definitely sees like the kind of role that would suit him. He is brilliant with his comedy, no doubt, but these kind of serious roles seem like his forte. Take Rowdy Rathore, Baby or any suck films.

We aren’t particularly able to guess what could be Shruti Hassan’s role in this film. In most cases such films don’t really have much to offer to the actress. We are hoping she has some meaty role rather than only being a barbie doll in the film.

What did you think of this teaser? Please share in comments.