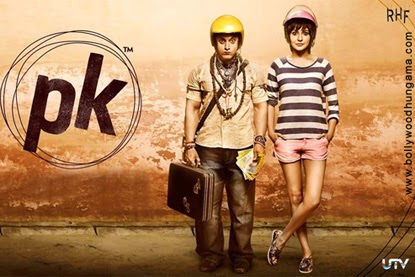 A smart satire for all ages

They first joined hands in the 2009 blockbuster 3Idiots and left us asking for
more. Five years later, the actor/director duo is back and how! Whether it be the
teachings of Mahatma Gandhi or our botched up, ever pressurizing education
system, Raj Kumar Hirani has tackled these topics with such light hearted
finesse that it has left us spell bound for over a decade of watching his films.
Now, he has come up with a film that openly ridicules our blind faith in religion
and how certain self-proclaimed pandits/priests exploit us via our beliefs. In a
country that is obsessed and extremely sensitive about anything that is even
remotely close to religion, Hirani has done a swell job.
The film opens with an alien, PK (played by Aamir Khan) landing on earth in
his birthday suit. He loses an item that can help him get back to his planet.
Therefore, the wide-eyed, red lipped (he eats pan all the time), funny eared alien
sets out on a hunt to get his item back. Everyone tells him that only God can
help him and so he begins visiting temples, mosques, churches et al in his quest.
In the process he discovers the wrong doings of a certain tapasvee (Saurabh
Shukla) and plans to expose him. He is helped by a quirky news reporter Jaggu
(Anushka Sharma) who promises to help him when she hears his entire story.
Jaggu holds a grudge against the tapasvee who intervened and ended her
romance with her Pakistani muslim boyfriend (Sushant Singh Rajput). Jaggu’s
boss (Boman Irani) joins hands with this duo to expose this tapasvee who had
been playing with the innocent emotions of common people. What follows this
is a question and answer duel between the alien and the tapasvee that expose
very bitter truths about the Indian concept of faith and religion.
To begin with, PK is not an easy story to deal with. To critique a country’s
customs and beliefs in religion with such depth and simplicity is commendable.
It is a satire that leaves you to ponder on certain grave issues without over
loading your brains. Raj Kumar Hirani and co-writer Abhijit Joshi have
designed scenes that are clever, deep and rich in the irony of the issue. While
the first half is filled with giggles and laughter at the poor alien’s quest and
journey from Rajasthan to Delhi, the second half takes a serious turn. Not for a
moment do the audience feel bored or let down. The screenplay is so beautifully
written and the editing so crisp that it doesn’t allow you to leave you chairs
even after the film ends.

This is an out and out Aamir Khan film. The film is a beaming example of how
much the man has worked on his looks and diction to become PK. One does not
feel for a moment that he/she is watching Aamir Khan, he is PK. The way he
runs, the way he talks in Bhojpuri and the way he keeps staring without blinking
his eyes are absolutely adorable. Anushka Sharma has played her part very well.
She has expressed the right emotions without over doing anything. Saurabh
Shukla as the con tapasvee is a delight to watch. It is such a shame that the man
spent so many years in the industry unnoticed. Boman Irani has a very short role
but is charming. Sushant Singh Rajput is fantastic. His performance goes out to
say that if one is a good actor then the length of the role really doesn’t matter.
Sanjay Dutt as the well intentioned band master is brilliant. Do check out
Ranbir Kapoor’s cameo in the film. He definitely puts a broad smile on
everyone’s face and we end up yearning for more.

All in all it is a bold film. Not only because of the topic it handles but also for
the way it is handled. It is an out and out Hirani film with some genuinely funny
and equally genuine thought provoking moments. Just one complaint sir, please
do not take another five years for your next film. We are in dire need of good
Hindi cinema. A big thank you for ending 2014 with PK, especially after the
films that we have been through this year!

The Songs are really catchy and nicely placed in the movie, and perfectly give a compliment to the movie.

These Posters Perfectly Depict The Differences Between British And American English