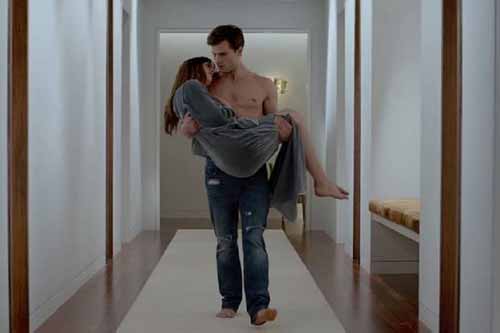 It doesn’t matter whatever we are going to say, right? Most of you are still going to go and watch it. But, it is our job to inform and so we might as well get on with that.

The book has been a part of controversies from the word Go. While many feminists thought it was highlighting an abusive relationship, the cultural conservatives had a complaint of their own with all the sex that was projected. And yet the author (E.L. James) has managed to sell over a hundred million copies worldwide, earning genuine, loyal fans.

The film therefore had a lot of expectations to fulfill. First up, Dakota Johnson as Anastasia Steele is fantastic. She is everything that you imagined Anastasia to be and so much more. She plays the role of a timid, coy college girl to perfection. Jamie Dornan as Christian Grey shines, but he still looks a little out of play. The confused, dominating, frustrated Christian doesn’t come across very much in certain scenes and we feel like it’s Anastasia who is subtly leading the relationship.

The story obviously is known to everyone, but for those who don’t. Anastasia, a shy college girl agrees to interview the charming billionaire Christian Grey for her roommate who is suffering from cold. They fall for each other only to find out that each one’s concept of a ‘relationship’ is ridiculously different. Christian only understands the concept of a dominant and a submissive and wants Anastasia to become his submissive. She is given a full length contract that includes several rules about her lifestyle and sex life with him. Although she is phased out by his shocking revelations, she isn’t able to let him go and complies. The trilogy therefore, focuses on their so-to-say complicated relationship.

The movie has tried to live up to the expectations of millions of fans and has stuck to the book to the T. Although, a lot of sex scenes have been edited or taken off for obvious reasons. Certain portions are shot extremely well like Grey’s entry, the tension is beautifully built between the lead characters and the final scene does provide a strong emotional punch which is extremely well executed by Johnson.

Umm here’s a feeling; this could get banned. Taking under consideration the amount of bans that are taking place in the country currently; we have a feeling this could get banned too in the name of “bad foreign culture”. If you are planning to watch it; do it sooner than soon. The banning part could be reality before you finish reading this article. The sexual content is high here.

Our verdict: Like you even care! You are going to watch it anyway. So, have fun!

P.S: Ever thought if this film was made in India who should be the lead pair? Give it a thought!

This Maggi Addict Kid Has The Perfect Answer For The Maggi...

AWESOME: NIEM Event Manager Of The Year Awards And Umang A...