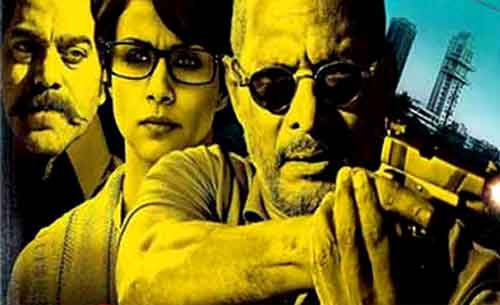 Certain things turn out perfect at the first attempt. The wise leave it and try something else, the visionaries take it forward and make it better and the foolish try to recreate it with no originality and spoil it. Unfortunately, Ab Tak Chappan 2 falls in the third case.The cover image is the portrayal of how bad the movie is.

Whoever thought that reviewing films is so much fun because we get to watch every film first day, first show, well you are highly mistaken. When we have to watch something like this, our jobs are a real torture.

Ab Tak Chappan was released over a decade ago. It had that spunk, a well-knit story, gritty dialogues and Nana Patekar at its best. The sequel only has Nana Patekar, period. And no matter how hard the man tries to salvage this film, there is only so much that he can do. Also, when the first part released, the time was different, plus it was produced by Ram Gopal Varma (remember him?) and directed by Shimit Amin. Too much time has passed since then and things have changed. The sequel is made by a bunch of people who had nothing to do with the first part except for being extremely impressed by it, we assume. Therefore, they have only tried to ‘recreate the magic’ rather than taking it forward. This makes Ab Tak Chappan 2 a very weak shadow of the first part with nothing new to offer.

Arguments between officers look like school boys fighting over a football and the direction is extremely poor. The director surely needs to take his lessons again.

As far as the performances are concerned, the cast is really strong, but most actors are wasted. The characters are sketchy and do not have any substance. They basically seem to be standing in the background mumbling their lines. Gul Panag plays the role of a crime reporter. Again, her character only has a skeleton, the muscles and blood seriously missing and she looks lost in most scenes. We don’t blame her for that.

Nana sir, you really need to prioritize on how you are being projected now. We have adored you and your acting skills for decades. This is definitely not how we want to see you. We aren’t questioning your acting skills at all in this film. But it’s painful to you watch you lost and aimless in a film that you aced the first time. We believe you are a director’s actor; therefore choose the director carefully. We ant more of the Agnisakshi kind of performances from you. Even something along the lines of Rajneeti will do for that matter, but not this!

Our verdict: DON’T WATCH IT! Even if you are a Nana Patekar fan, it will break your heart

Latest Video: Salman Khan Acquitted By Court In The 2002 Hit-and-Run...

WHEN SECRETS WERE REVEALED IN F.R.I.E.N.D.S- PART 1

How Much A Beggar Earns? A DU Graduate Became A Beggar...