DUM LAGA KE HAISHA REVIEW: A FILM WITH A SOUL 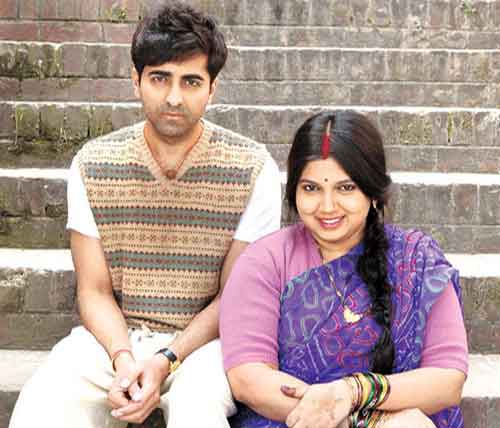 “I am working hard to understand commitment,

Marriage is just a by-product.”

This is what you will probably learn from this movie made with a lot of emotions and with its heart in the right place. First up, Ayushmann, welcome back! It’s a pleasure to see you back to you Vicky Donor days and out from your disastrous Hawaizaada days.

The film opens with a setting of the 90’s in Haridwar. We are introduced to a dysfunctional family who is not happy about anything and ironically they are placed in Haridwar, a place that is known for its peace and spirituality. Prem Prakash Tiwari (Ayushmann Khurrana) owns a cassette shop and is basically an unsuccessful guy. He loves Kumar Sanu’s songs, doesn’t know English and is most scared of his father (Sanjay Mishra). His life takes a major turn when his marriage is fixed with the creative and talented Sandhya Verma (Bhumi Pednekar). Her only “problem” is that she is 85 kgs and therefore Prem rejects her. He marries her eventually under family pressure. While the cute, innocent Sandhya tries to win her husband’s love, he is least interested to even identify her attempts.

Things get much more complicated when Prem’s mother insists that he participate in a race with his wife. This turns out to be a turning point in the husband-wife relationship and gives Prem a chance to prove his worth to a family who finds him useless.

The performances are splendid. Ayushmann has acted brilliantly and you absolutely empathize with him every time he is emotional. The dissatisfaction of a man wanting a “beautiful”, “slim” wife and getting married to someone  completely opposite is perfectly emoted by Ayushmann. But, it is Bhumi Pednekar who completely owns the film. She becomes Sandhya from the word go. Initially you find her stupid, then cute and before you realize you just end up falling in love with her. She is definitely the coolest find by YRF. If she doesn’t bag the debut this year, then there is something wrong with the panel. The supporting cast is equally splendid and manages to maintain the interest of the audience.

The beauty is in the detailing of the sets. You literally feel like you are transported to the 90s where people were kinder, air was cleaner and life was simpler and satisfying. Even the way the dialogues are written, the way they have depicted a typical ‘arranged marriage meeting’ in the 90s is splendid. Kumar Sanu is the soul of the film. To everyone who loved Kumar Sanu and valued his melodious voice, this film is for you. Anu Malik has done a decent job with the music. Dard Karaara is beautiful and the best pick from the film’s album.

We often give immense important to colour, height, weight and what not. But the film sends a beautiful message that love doesn’t choose, if you are meant to fall in love with someone none of the criteria really matter.

Kudos to Yash Raj for making such films as well, otherwise the Dhoom series and many others are really giving us a brain freeze!

Our Verdict: Go watch it and smile! Also, spread the word. This one is bound to work by the word of mouth.

﻿ Hilarious: This Is What Will Happen If Sheldon Cooper...