BADLAPUR REVIEW: WE SAY DON’T MISS THE BEGINNING AND THE END 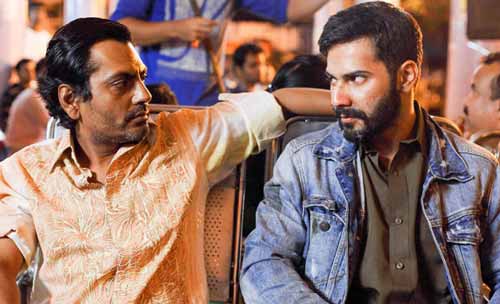 Imagine you ordered a pair of shoes from Amazon and they delivered two pairs, along with a set of branded headphones and t-shirts all together as a part of the package with no extra charges. It sounds unbelievable, right? That’s the feeling you will get after watching Badlapur.

We went in expecting a power packed performance by Varun Dhawan and Nawazuddin Siddiqui; we got so much more. Your average thriller talks about gore, the dark villain, the white hero and justice served in the end. Well, Badlapur is fiercely different and brilliantly convincing. There is a lot of violence and gore for sure, but each character is reflects a different, darker (sometimes lighter) shade of gray.

The film opens with a regular day going absolutely wrong for Misha (Yami Gautam) and her son Robin who lose their lives in a bank heist. The culprits Liak (Nawazuddin Siddiqui) and Harman (Vinay Pathak) are on the run and plan to use Misha’s car to do so. With the unfortunate turn of events, Harman escapes with the money and Liak ends up in jail. Liak remains true to his partner and doesn’t give him away; he also maintains that he didn’t kill the young mother and her child and was just present in the wrong place at the wrong time. He is sentenced to 20 years in jail. Raghu (Varun Dhawan), who has turned into an emotional wreck after the loss of his wife, child and his perfect life, shifts to Badlapur and waits for Liak’s release in order to find out his partner. This is the story’s basic track. It is filled with unexpected twists and a shocking end.

Varun Dhawan is splendid as Raghu. He mostly emotes through his eyes that generate genuine empathy for his character from the audience. It’s not only his beard or his beefed up body that give him that matured look over a decade and a half covered in the film; it’s his body language and his persona. Nawazuddin Siddiqui is the biggest asset for Hindi cinema today. He breezes through every scene and every dialogue. Undoubtedly Varun had the biggest challenge matching up with a man of such talent who is born to play such ‘in your face’ cheeky roles. Siddiqui has been funny and unapologetic in the same moment and leaves you spellbound. The women in the film have been absolutely stunning with Huma Qureshi leading the bandwagon. She has managed to offer so much more in her role as a prostitute. Directors please take note of this power house of talent. Huma and Nawazuddin together are fireworks; absolutely uncanny and bold.

What we really would like to question is the way women have been treated in the film. Why such hatred and misogyny? That’s something we haven’t really been able to digest, especially when it came from Varun’s character. We presume a lot of feminist audience is going to raise questions about this one.

The screenplay breaks all clichés and is beautifully layered. The cinematography provides the perfect mood and subtly adds to the pace of the film. There are certain loopholes in the film that surface quite obviously sometimes, but we chose to overlook them for the sake of the brilliant narrative style.

The music is good and most songs are topping the chart busters list; especially Ji Karda.

All in all we are glad director Sriram Raghavan is back to his Ek Hasina Thi and Johnny Gaddar days and has recovered from the Agent Vinod disaster.

Our Verdict: Don’t miss this one

This Miss Colombia Goof Up In The 2015 Miss Universe Pageant...