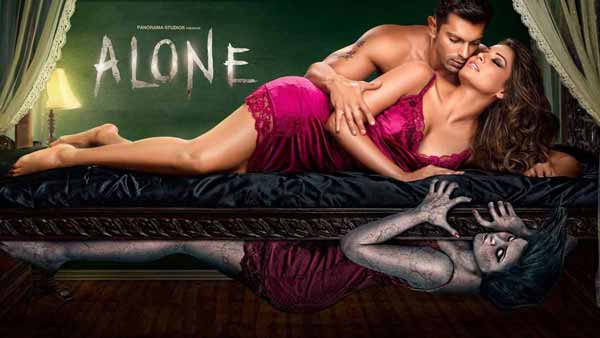 Bipasha Basu is really living up to the title that the media has given her “Queen of Horror” and in her attempt to stay so, Bhushan Patel (Ragini MMS2 and 1920 Evil Returns fame) has stepped up this time.

Obviously Alone is a horror film, but with quite a new storyline. The film is a remake of the Thai super hit with the same title. The plot has been ‘adapted’ to such an extent that even the trailers of both films are almost similar. Okay, let’s not get there!

The story of Alone centers on the lives of conjoined twins, Sanjana and Anjana (played by Bipasha Basu). Both love each other immensely and take a vow that they will always remain together and never separate. Enter Kabir (Karan Singh Grover) and things begin to change. Both the girls fall for him, while he falls in love with Sanjana. After a series of events, Sanjana decides to separate from her sister via the surgery. Anjana dies as a result.

Cut two. Sanjana is an extremely possessive wife of her now husband Kabir. She loves him more than her life and cannot tolerate anyone coming in between them. This leads to a lot of argument between the couple. Sanjana returns to her hometown, Kerala, after six years to meet her ailing mother. The place brings back fond memories of her dead sister Anjana and it adds to her guilt. When Kabir notices that Anjana’s room is locked, the smart-pants open’s it and this leads to the entire rigmarole of horror and revenge.

Sanjana starts complaining about being haunted by Anjana leaving her husband befuddled. He takes her to a shrink who advises “love” and “care” for the wonky wife. Gradually, things get really nasty with people being hurled in the air and the wife acting crazy. And then is revealed a secret between the twins that changes all equations.

We feel the director is quite confused with whatever it is that he is trying to convey. Most of the film is shot on beds. The whole plot of seduction and sexiness is so overdone that it steals away all the creepy moments. Actually, most of it looks predictable. To add to this is the roaring background score that practically drives us deaf. May be a scene or two could look scary, but they cease to go beyond that.

Bipasha, attempts to look scared and scary both in a lingerie and Karan amply supports her flashing his toned body at every chance he gets. He is a good actor but seems hugely overshadowed by Bipasha in the film. Some of the scenes really make us laugh rather than scream with fear. Silly words like “Bhootpuran” are thrown at us and we just end up having pity on the actors.

The music is forgettable and the support cast has nothing much to do then to loiter around the set.

Our Verdict: Give it a miss, unless you really have nothing to do this weekend.

What If Candies Had Religion? A Beautiful Social Experiment On Religious...

Maggi Banned: This Is How Life Would Be

Project Loon Is Coming To India! We Will Now Have Internet...