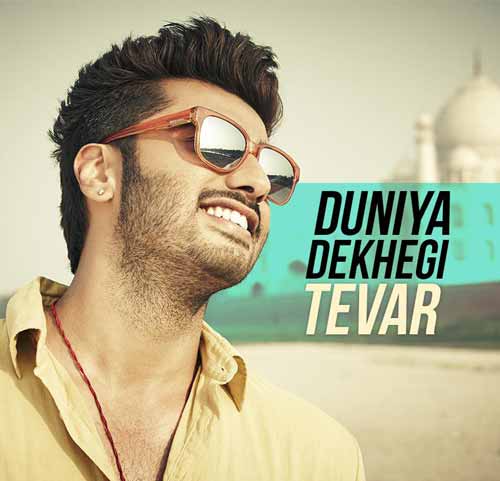 This was pretty much our reaction for the Arjun Kapoor, Sonakshi Sinha and Manoj Bajpayee starrer Tevar. A Mathura goon, younger brother of the Home Minister, falls head over heels for a sweet college girl after watching her dance performance. And like we have been subjected to the crazy villain ego in each and every action film, he won’t take no for an answer from her. On the other hand is the son of a police inspector who believes in helping women and is a self proclaimed feminist. But he calls the heroine a “watermelon” in the film, so much for feminism.

When the goon plans to kidnap the girl, our brave man saves her and the young couple runs from one place to another escaping the goon’s pantar log. There is nothing new in the story at all. It is the oldest formula where in the hero and villain both want the same girl. Such a plot still has the potential to attract some ‘moolah’, if it is executed in the right way. That is not likely to happen with this film. The movie does not have its heart in the right place. Certain action sequences are shot well, but there is nothing else to the film beyond this. The only hope to this otherwise boring film is Manoj Bajpayee. Every time he comes on screen, he manages to generate some interest in the film.

Arjun Kapoor is likeable, but not convincing. We hoped the “Salman ka fan” was given some handy tips by his idol on action sequences and their execution. If Papa Boney Kapoor had worn the director’s hat for this one, he would have been able to revive some of the much “Wanted” “Jalwa” in to this one. While Salman Khan, Akshay Kumar and Ajay Devgn manage to become the character they play in action films, Arjun looks too naïve and under trained sometimes. But the boy sure has a lot of potential. Sonakshi, sweetheart you really need to get out of action films now. You have steeped way too deep in to the pit of action films and before you are beyond redemption you need to bring us the “Lootera” Sonakshi back.

The story of the film is extremely predictable. Things and incidents that could be handled easily within minutes stretch for hours. The kabbadi match in the climax projects an obvious end from the very beginning.

The supporting cast of the film does a fine job.

Shruti Hassan sizzles in an item number and looks extremely hot. The song is sung horribly though.

The direction is okay and does not offer anything new.

The music of the film is likeable. “Radha”, “Superman” and “Joganiyaan” sound good to the ears.

So, the New Year’s first release works as a disappointment. Better luck next time Arjun. We do love you.

Our verdict: Give it a miss.

This Brilliant Viral Video Teaches You How To Turn Your Smartphone...

Ki & Ka Trailer Is Changing The Face Of Indian Cinema...