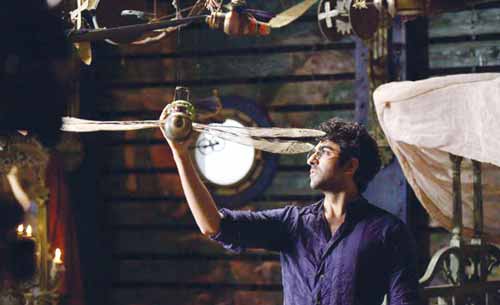 MAY DAY! MAY DAY!

Believe us, this was our exact reaction after watching the untold story of scientist Shivar Bapuji Talpade, who is credited to have constructed India’s first unmanned plane, even before the Wright Brothers. The premise is beautiful, but when it came to the execution, it left is yawning.

Director Vibhu Puri, introduces us to the pre-independence era with his elaborate and grand sets. The film portrays the Bombay of the 19th century where out scientist Shivkar (Ayushmann), fondly known as Shivi, is thrown out of his school because he keeps failing in the same class over and over again. Enraged by his callous and carefree lifestyle, his father throws him out of his house. This gets our Shivi to start drinking and falling madly in love with Sitara (Pallavi Sharda). Enter Subbaraya Shastri (Mithun Chakraborty) and his life changes. Shastri is this cuddly old man who inspires him to leave his ill habits and build a plane. The sets are elaborate and look extremely inspired from Sanjay Leela Bhansali’s films. Also, Sitara’s character seems like a blend of Chandramukhi and Paro from Bhansali’s Devdas.

The British are only seen as a bunch of blabbering baboons and don’t really do anything to add to the film’s plot. Ayushmann has worked hard on the film, but at certain moments it seems like he has worked too hard and that takes away from the natural performance that he had managed to deliver in his debut film. Mithun, is better than good in this film. His role is meaty, but the script fails him at times. After the disaster with Besharam, we are just glad that Sharda got a film wherein she could project her talent. Although, her looks and body don’t really give us a feel that she is playing a woman hailing from the 19th century. The film seems more like a director’s musing of what would have happened and it doesn’t really seem very realistic. Plus, the audience is interrupted by over five songs and that makes it very difficult to concentrate on the film and it keeps on breaking its pace. It is also so very difficult because there isn’t really a scientific proof to a lot of things depicted in the film. And that doesn’t even deter the director from making the film anyhow.

The music is quite average and the songs are forgettable. Again, we repeat, the concept was good, only if it would have been executed in the right way.

OUR VERDICT: Skip it. If you want to watch it even then, carry a parachute along to jump off this plane, because the need to do that will arise.

10 Reasons Why A Woman In Saree Is Appealing

10 Epic One Liners That Are Witty, Smart And ROFL Worthy

7 Beautiful Things About Old School Dating That Have Vanished Today