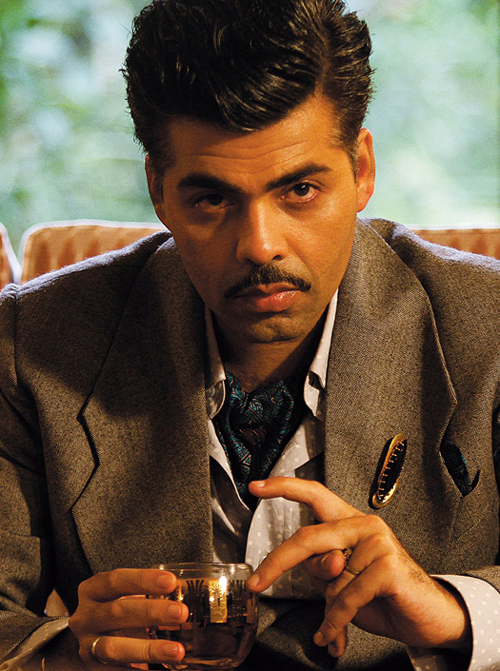 Most of us took a lot of time to digest the fact that Karan Johar is going to act in a film. It took even longer to comprehend that he is going to be playing the villain (I mean come on!) and that it’s a film directed by Anurag Kashyap (who doesn’t know about their famous spat from the past!). All of us waited with bated breath to unravel the much talked about Karan Johar look for this period film. The curtain opened recently when his “exclusive look” was published in leading newspapers leading to a lot of discussion and a mountain of shocked reactions at KJo’s brand new avatar. Of course it’s sassy and stylish (what else do expect from this classy director?). The reactions on Karan Johar’s look for the film ranged from “wow!” to “yuck”. we bring you a list of probable reactions all of us gave after looking at him in the newspapers recently. We are absolutely sure you will find an apt reaction for the way you felt about his look here. Here’s sincerely hoping this film is a hit and we get to see more of Karan on screen than off.

“Is that Karan Johar? NICE!

“He has to be classy even while he is acting.”

“LOL! If I was Ranbir and had Karan as the villain, I wouldn’t be able to stop laughing.”

“He is a director, producer, host, he dances well and now he is acting. What’s next KJo? Competing with Priyanka Chopra over a music album I guess.”

“ROFL! That? After what happened to him at the AIB knockout?!”

“Do you think he took some tips from Shahrukh?”

“He must have designed his own clothes for the film. I can bet on that.”

“Why whisky? Doesn’t he seem more like a wine guy?

Arre character’s demand must be whisky.”

“Oh! This is why KJo and Anurag Kashyap are BFFs now.”

“Really? Him? What was Anurag thinking?”

“Hey what if he’s playing a gay mafia in the film?”

No dude. He had those curls.”

“Okay so no matter whoever debuts this year, Karan is going to grab that award.”

“He makes romantic films and is debuting as a villain. Irony!”

“Momma’s boy is all grown up now.”

“Does he even know how to hold a gun?”

“He’s too polished to play a villain.”

“Even Anushka can tackle him. Ha Ha!”

“He will be more of a manipulative kinda villain, you know. He won’t be getting into any combats.”

“Doesn’t he look a little drunk? Look at his eyes.”

“He seems to have lost weight for the film.”

“OMG! They are going to rip him apart in award shows next year.”

These are some of the reactions/comments that we managed to pen down. What’s your say on Karan Johar’s new look? Share in comments.

What If Candies Had Religion? A Beautiful Social Experiment On Religious...

This Woman Recreated The Best Rachel Outfits From F.R.I.E.N.D.S And It...

The Dugout Is Hosting An Unlimited Pizza Night With F.R.I.E.N.D.S

Four Plots From Game Of Thrones Books We Want To See...