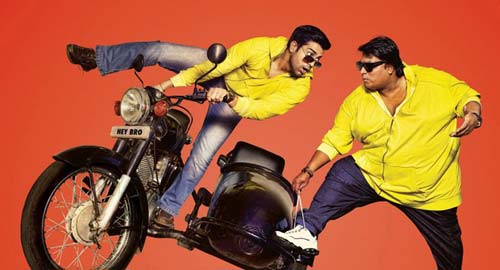 We all love Ganesh Acharya and his moves. Sometimes, it’s hard to believe the amount of grace he manages to bring in his body despite is weight. This time, he tries hard to make us laugh and umm well he is quite mediocre, honestly.

The story opens with an innocent man named Gopi (Ganesh Acharya) who leaves for Mumbai to look for his lost twin brother and his mom. He doesn’t really have a picture of the two, since he got lost soon after birth and yet sets out on his journey as it was his grandfather’s (Prem Chopra) last wish. When he reaches Mumbai, he shows his own picture to look for his lost brother because he has a specific impression about twins based on the movies he had seen. Throughout his quest to find his lost family, the audience is treated with a lot of stars in guest appearances and some genuinely funny moments. He ultimately manages to find his family with the help of a girl (Nupur Sharma)

The first half manages to generate some interest while it builds the plot, but the second half is an absolute drag. It literally forces you to take frequent loo and popcorn breaks in-between. Ganesh, tries hard to tickle our funny bone, but fails after a while. The biggest problem with the film is that the writer has put too many “funny sequences” in the film and therefore the audience is over-dosed with slapstick comedy half way into this film.

The music is decent. Mera Gaana Baja de and Birju are good to the ears. Birju lights up the screen since it has too many actors to amuse you. But then, you can watch that on T.V, right? Although, every time Ganesh shakes his leg a little, he literally bewitches you.

The performances are average and nobody is really worth noticing. The dance is the only thing that can probably attract some people towards this film. Although we highly doubt it.

Our verdict: Only and ONLY if you have nothing else to do, you could try watching this one.

12 Hilarious Placement Coincidences That Are Spot On

This Video On Alan Rickman Most Memorable Characters Tells You Why...

This Is What Happened When SRK And Sundar Pichai Met Each...

These Images Of Mike Tyson’s Abandoned Mansion Will Shock You